The six founding members: Lennart Bartholdsson, Carl-Evert Jonsson, Bengt Pontén, Jan Olof Strömbeck, Hans Holmström and Lars Uddströmer met at the Arlanda airport, March 1983, and wrote the draft for the statue of the society. In the early days of aesthetic surgery in Sweden it was only doctors from the 7 university hospitals that performed aesthetic surgery in their free time. Publications and science from Sweden at that time focused on reconstructive surgery: refinements in reduction mammarplasty (Strömbäck), blepharoptosis, TRAM flap, reconstruction of noses with Binder syndrome (Holmström), reconstruction after vulva cancer operation (Bartholdson), supercharged fasciocutaneous flaps (Pontén), refinements in treatment of burns (Johnson) and reconstruction of the rheumatism affected hand (Uddströmer). 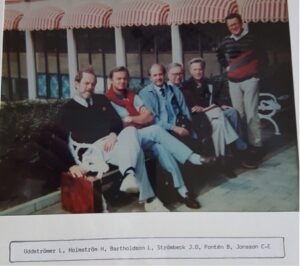 The formation of SFEP was met with the criticism from several important members in Swedish Society of Plastic Surgery, which was difficult to understand.

In Sweden, at that time, esthetic plastic surgery was performed only by the

senior academic plastic surgeons on the part-time basis. One who started doing private operations before he became consultant and defended his Ph.D. was asked to pack his trunk.

In the mid-eighties the demand for aesthetic surgery in Sweden and world-wide was raising, but only a few new openings per year in the hospitals were available for the younger specialists. There were no private clinics to join and Sweden was not within the European common job market yet. Therefore some of them, more energetic and entrepreneurial opened free-standing clinics, mini-hospitals for aesthetic plastic surgery. They formed their own Club and during the years 1990-91-92 three live-surgery symposia featuring operations by the international celebrity surgeons, were organized by the Lidingö-Kliniken. Among them were Rodolphe Meyer, Ulrich Kesselring, Yves-Gerard Illouz, Jan Olof Strömbeck, Gilbert Aiach, Howard Gordon, Bengt Johanson and Hilton Becker just to mention a few, who shared with us their knowledge and experience.

The monopoly for “the real knowledge and skills” held by the university doctors was broken and even the full-time practitioners were allowed to join SFEP and gradually gained over the majority in this society. The membership increased during the nineties to about 50 surgeons and yearly meetings with invited international speakers were held. Initially our meetings focused on the one topic at the time, such as face-lift, rhinoplasty or abdominoplasty, but gradually evolved to encompass the wider spectrum of our subspecialty. Standing contributors to the programs at our meetings at that time were, and mostly still are, Jan Bertil Wieslander, Igor Niechajev, Per Hedén, Jan Jernbeck, Michael Olenius and Carl-Åke Troilius. Christer Lindkvist must also be commended for leading our society for an unprecedented period of 11 years 1992-2003. Our members at Akademi kliniken organize since 2002 yearly, and nowadays prestigious, International Meeting in Stockholm “Beauty through science“. Per Hedén is its President and the faculty assembles each year crème de la crème of plastic surgery.

Today SFEP has 74 active members and our Board has 4 members and employs part-time secretary. An expert on IT issues is associated with the Board. Our members served as the Committee Chairman in the Board of ISAPS: Educational Council Committee (Troilius), Finance Committee and Foreign Relations Committee (Niechajev).

Ever changing world brings the new challenges to be faced by our society. The education, initially planned for the surgeons, must now include the general public, politicians, legislators, patients and the media. Another tasks of the Board are the legal and economic issues caused by the introduction of VAT on cosmetic operations and treatments in 2015 and participation in ISAPS work on the new European standards for aesthetic surgery services, important for the improvement of patient safety.

SFEP initiated in 2014 creation of Swedish Breast Implant Registry BRIMP guided from the beginning by Birgit Stark, who like Atlas holding the sky on his shoulders, does alone all the work keeping the registry going. The compliance of members is high and it is already possible to make analysis of the several outcome parameters. The results will be reported at yearly SFEP and EASAPS meetings, and we expect other countries to follow and create their own registry, which is certainly not easy.

Our Society is involved in dealing with PIP breast implants disaster. Four thousand women in Sweden were implanted with PIP and we have to face patients, media and even courts. The ALCL is another upcoming issue, actual now for every meeting we attend, and the SFEP is helping members for giving correct information for the patients and media and to report suspect incidence.

During the last three years SFEP have been conducting pooling on various patient safety issues, with the help of a questionnaire filled out by the members. The results were analyzed and discussed at SFEP yearly meetings and the guidelines were worked out with a panel of experts. The following topics were covered:

Sfep meetings provide forum for important social interaction with the colleagues, and opportunity to personally speak with peers during the scientific proceedings and at lunches and dinners. During the coffee breaks we can meet with the old and new friends are familiarize ourselves with the new products presented by our sponsors.

It is not easy to become member of SFEP. The Society is proud of its achievements and every member should be proud to be the part of this Society.

Precise dates and topics for our next meeting is always up-to-date at our website: www.sfep.se

Chairmans of SFEP are